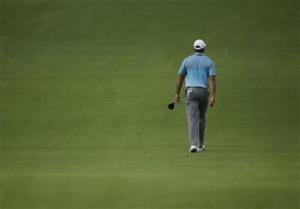 I still want Tiger Woods to walk into Butler Cabin on Sunday night, accept his fifth green jacket as Masters champion and renew the chase of Jack Nicklaus’ 18 major titles that once seemed a foregone conclusion but now seems like an overambitious fever dream.

Michael Jordan is a decade too old. LeBron a decade too young. Tom Brady too pretty. Peyton Manning too polite. For men of a certain age, Tiger Woods is our avatar. The torchbearer for a generation of athletes (and wannabe athletes) whose single-minded greatness served as undeniable proof that Generation X _ who invented navel gazing before the millennials took a stab at perfecting it _ really are the Best. Thing. Ever.

It’s not his fault, really, that he bore the burden of our own expectations. His father raised him _ or maybe engineered him is the right word here _ to be that beacon.

“Tiger will do more than any other man in history to change the course of humanity,” Earl Woods once famously said before his son was old enough to drink legally.

And here’s the thing, Woods seemed to thrive off the pressure. His success was our triumph. Over the course of four days in April, 1997 he changed a stodgy, graying and moneyed game forever. Birdie after birdie after birdie between those plush azaleas and Amen Corner and the Eisenhower Tree. He was the hip-hop (albeit in his own benignly nerdy way) son of an Army infantryman, a biracial amalgam of golf’s New World Order. He word red on Sundays and blasted Biggie Smalls from massive speakers during practice rounds back home.

He turned an elitist sport and pushed it kicking and screaming into the 21st century. The powers that be at Augusta National were so terrified of his talent they added heaping amounts of  “a second cut” to try and give mere mortals a chance.

There was more to it than that, of course. Somewhere along the way the kid nicknamed “Urkel” by his college teammates at Stanford became less “You the Man” and more “You the Brand.” And it was all well and good as long as the victories piled up. If he felt the need to put himself at an icy remove, whether it was letting a former Masters champion turn on the media-crazed spit awhile before accepting an apology for racist remarks or hiding out on his yacht named “Privacy” that was fine. On Sundays in the spring and summer, he was our golf-club wielding pied piper, smashing records and stereotypes, showing our parents that we knew what we were doing, that we had things under control, that the future was not beholden to the past.

He burst onto the scene as a supernova burdened with outsized expectations and not only managed to surpass them but had no problem rubbing it in the game’s face in the process:

Woods was perhaps the last big star to evolve before the Internet truly came of age, before every public misstep was tweeted and Vine’d and parsed by TV caricatures for our entertainment. Inside the cocoon he created for himself it’s easy to see how things could get lost, how priorities could get mixed up, how personal shortcomings could stay hidden from view.

He married the pretty girl, had two beautiful kids and bought an island. By the time  he reached  his early-30s, Woods wasn’t going to break Jack Nicklaus’ major record, he was going to bury it. The chip-in back on 16 at the Masters in ’05. The putt on 18 to force a playoff at the U.S. Open in ’08. The tearful embrace of his caddie Steve Williams at Royal Liverpool to win the Open Championship just weeks after his father’s passing. These weren’t just milestones but something more, something deeper. This was our generation growing into adulthood, surviving whatever life threw at us and coming back stronger than ever.

I’m a child of the 80s. My father and I were friendly but not close, so I discovered my role models in the pages of Sports Illustrated or The Washington Post.  The mistakes of my athletic heroes rarely made it into print. I didn’t know my favorite football player was a sometimes petulant child behind the scenes, that my favorite college basketball player wasn’t above trying crack cocaine (whatever that was to my 11-year-old self) until it was far too late.

Of course it all came crumbling down on that night in December, 2009, when he became a punchline and just another philanderer, fodder for talk shows and tabloids. His response was tone-deaf at best and frighteningly out of touch at worst. The image he so carefully cultivated came crashing down around him. He was mortal, after all. Painfully so.

And while he’s spent the last six years battling his stunningly fragile body, his form and the ghost of his own dominance on the course, off it he has become something of a curiosity. His ex-wife has moved on. He is arm candy to the world’s greatest skier. The pieces are still being put back together. Who knows how far he’ll get.

And maybe that’s why I still find myself in his corner. We all fall short. I reached a painful crossroads in my life four years ago. I’m still grappling with the reasons, the remorse and the recovery. I don’t view Woods as a role model or a touchstone for my generation anymore but simply a product of it. I have friends working on second marriages, second careers and second (or third, or fourth) chances. Woods is in a different tax bracket, but he’s really no different from the rest of us. The perfection we projected onto him is myth-making at its finest.

My 5-year-old son is starting to take an interest in sports. He reads ESPN’s “Bottom Line” religiously and shouts out the scores. He knows who “The Crosby” is and where the Pirates play. He’s obsessed with race cars and can name more NASCAR drivers than I’m willing to acknowledge in public.

He will develop athletic heroes of his own. And that’s OK. I want him to have posters on his wall and jerseys to wear. Yet I’ve come to realize that heroes are one thing but role models are another. He can root for any player he wants. He’ll no doubt one day stumble upon a phenom who he’ll identify as the leader of the next wave, the one that will be better, bigger, faster and stronger than his dad’s.

There’s nothing wrong with that. It’s what’s supposed to happen. The problem begins if Colin takes his cues on how to act from the millionaires his father writes about. Then I’m doing it wrong.

One day _ hell maybe this weekend _ we will talk about Woods. When Colin is older he’ll get a chance to read all about Woods’ ignominious fall. My hope is he doesn’t pass judgment. My hope is I can teach him _ in a way that I was never taught _ that people screw up but it does not necessarily define who they are.

There is nothing Americans love quite as much as a good comeback. Maybe Woods will regain his confidence, his swing and his swagger on the same lush greens where he began forging his legend 18 years ago. Or maybe he’s done. The next generation is already banging at the door, ready to bust through and turn Woods into a sideshow and a footnote (it’s possible it has already happened).

I’m pulling for one last stand, an Indian summer before the sun sets on the prime of his career for good. If the rest of us can return from the brink, then he can too.

I am Tiger Woods. And he is us. Warts and all.