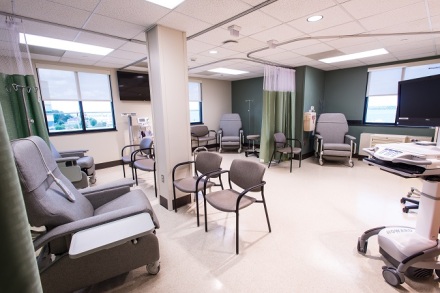 I’ll be honest. I thought I was going to be The One. Patient Zero. The One Who Made The Impossible Possible Because I’m Just So Damn Awesome.

Sure, I’d read all the material (or at least the parts I could decipher) when I was diagnosed with Waldenstrom’s Macroglobulinemia four years ago.

I became an “expert” at reading and interpreting hemoglobin levels, red blood cell counts, platelets and all the other terms I would have remembered had I been paying attention in 10th-grade biology. (Note: I did not).

Yet here’s the passage I couldn’t get out of my head even as my care team assured me I was going to be just fine.

“WM is usually indolent (slow growing) and can be managed as a chronic disease for a number of years. However, it is not yet curable.”

I mean, it SAYS that. But it doesn’t actually MEAN it right? Incurable? Really? All I could think of as my body responded brilliantly to 18 months of treatment was something along the lines of …

I mean, just ask me, I’ll tell you. Repeatedly. It’s kind of my thing.

I can’t pinpoint when the feeling of invincibility came in. Maybe it was training for the Pittsburgh Half Marathon in 2017. Maybe it was running all over Rio de Janeiro during the Olympics. Maybe it was going open to close with my wife and kids at Kennywood. Maybe it was walking up a flight of stairs without thinking I was having a heart attack.

Or maybe it was always there. I was a dork in high school. (Are you stunned? Yep, you’re stunned).  Acne. Socially Awkward. The whole deal. Yet my junior year I somehow talked myself into asking the hottest girl in our school (and also one of the nicest) to the prom. Blame it on an overdose of John Hughes movies.

One day, about two months out, I worked up the nerve. I put on my best black-and-white paisley shirt and my pleated pants (hey, it was the early ’90s). I may have even showered. As we walked out of trig class (#nerdalert) I caught up to her and sort of asked her if she was going to prom. Here is an artist’s re-enactment

Anyway, turns out she already had a date with Tom, the very nice, very tall and very senior guy she sat next to in our class. She couldn’t have been nicer. I couldn’t have been more crushed. It didn’t matter that I had no car. No license. No money. And certainly not a clue as to what I was doing.

Yet I was still convinced I could get her to say yes. The image of me stopping in my tracks with her politely smiling back at me as she continued down the hallway on Tom’s arm is seared into my brain.

Looking back, I’m not sure if I was disappointed she turned me down or impressed that I’d somehow convinced myself I could get her to say yes in the first place.

The same feeling returned when I got the quick stats on my blood panel earlier this month. Hemoglobin: 9.7. RBC: 3.49. IgM: 1950ish. (Translation: I’m not a walking corpse like I was when I was initially diagnosed in 2014 or anything, but I’m not so great).

I knew what they meant immediately: that it was time to go back in for treatment. For more pricks to the belly. For more stabs to the hip. For more drips to the vein in my left hand.

I gave myself 24 hours of self-pity followed by 6 days of driving my wife insane and wondering how I would tell my kids, who are now old enough to know (and ask) why daddy is going to the doctor’s office so much.

Then I walked into the waiting room and the sense of anxiety vanished. I’d been so well for so long _ nearly 3 years with little more than the occasional sniffle _ that I’d made myself believe it was never coming back. There’s the miracle.

It’s also only part of the story. A small part.

The reality is I’m not different. I’m just like everyone else with this curious and frustrating disease. And I’m also lucky as hell.

The proof came at me from all sides when I stepped into my hematologist’s office:

3. Since we caught it so much earlier this time, I don’t (for now anyway) need any blood transfusions. (Though there is a dire need every single day so roll up your sleeves, eat some free Cheez-Its, grab a can of juice and a stress ball and go. I know you’re scared. Go anyway).

4. I can return to playing the “I Have Cancer” card to engender unearned goodwill, copious amounts of pity and maybe – just maybe – get myself out of cat litter duty.

So next week I’ll go in. I’ll get jabbed. I’ll get weighed (here’s hoping I can at least trim 15 lbs like last time). I’ll get jabbed again. And on most days I’ll walk out right back out. And the folks in there – many of whom are in far worse spots in their battles than me will go “who is that kid?”

Trust me, I’m no one special. And that’s the beauty of this. I am pretty much the same person I was when I walked out of my first batch of treatment in 2015. (Though maybe a little more spiritual, maybe a little less inclined to get worked up over the small stuff – but only a little – and more mindful of my health in general).

And while there’s never been a better time in history to fight it, cancer has never been more determined to continue its insurgency. We have more ways to take it on than ever. It has more ways than ever to come at us.

The cancer center I attend has changed dramatically in the 33 months since I stopped going regularly. It’s expanded. Gotten bigger. What was an open-air room of 12-15 chairs and a couple of beds has doubled in size, with more on the way. The halls are byzantine. A little crowded. The construction apparently nonstop.

I used my initial blog post to tell the world I have cancer. I still do. But so do countless others. You know them. You might not have thought of them in awhile. You may not have seen them in awhile because … reasons.

But know this: they need you. Not to donate a kidney or half your paycheck. Not to bake a cake. (Though cakes are appreciated).

They just need a call. A text. An email. A tweet. A Facebook message. My god, an actual ink-on-paper letter. A drop-in. A prayer. Time. Not a day or a week. But 10 minutes maybe. Maybe 20.

Note: I don’t need these things. I’m fine. Hell, I’m writing this so you DON’T call me.

I want to stress here that I am fine. Really. I’m so much healthier going into the battle this time than last time it’s laughable.

To put it perspective: cancer is the Browns. I am Not The Browns. Or for the gymternet: (yes it’s a thing, look it up) I am Simone Biles. Cancer is the vault.

Four years ago I went over my initial blog post over and over. I took a couple of days. I poured over every word. I ripped this off in an hour in between watching a Pirates game I’m covering because this isn’t a big deal. This is Tuesday.

I’m 43. I will have this for the rest of my (very long) life. It will come and go. It will occasionally slow me but it will NEVER stop me. Never. And for that and many other things, I’m lucky as hell.

I didn’t want this to just be a cancer blog when I started. But maybe that’s what this is supposed to be. Just like I’m supposed to have this stupid disease, the one whose ass I will continue to kick.

You know, if that girl in high school said yes, maybe I never meet my wife. Maybe I never have THIS family. Maybe this fight comes with different people, different stakes, a different care team and support staff.

The same goes for this disease. Maybe if I beat it once and that was it, my life would be in a totally different place.

It’s not. This is it. This is my fight. This is our fight. From the fortunate ones like me who have a version of cancer they can handle to the countless others whose battle is more uphill. We are in this together.