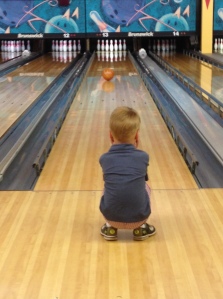 You’re not gonna believe this, but you start kindergarten tomorrow. Note in some far off daydream in my head, but In real life.

Your mother, sister and I will walk you the 400 feet from our front door to the bus stop. We’ll wait for No. 105 to come around the corner. The doors will open. We’ll make sure you have your lunch, your pencils and your courage. You’ll take three big steps up, find the window seat you’re so excited about and sit down.

Then off you’ll go.

You’ll be fine. Hell, the fact that this is your favorite song means we should just drop you off at the nearest college and be done with it.

You’re ready. Your mother and I are not. Not even close. Sure we’ve known this day was coming since May 20, 2009, when the doctors stubbornly pulled all 9 lbs., 7 ounces of you into the world. (By the way, there’s a good chance your mother’s gall bladder _ the one you held onto as they tried to unwedge your foot from her ribs _ still hasn’t returned to its original shape.) And sure there were times during those first few months when colic made you so angry every night I actually stuffed cotton balls in my ears to survive that I wouldn’t have minded the thought of you finding somewhere else to go every day.

Not anymore. Not by a long shot.

You (and your sister) are the greatest thing to ever happen to anybody ever in the world. It’s as if someone distilled the best parts of us _ your mother’s kindness, grace and generosity, my inherent silliness _ and threw away the rest of the crap when they made you.

Your curiosity astounds me. Your photographic memory scares me. The light burning inside you is so pure that the only thing I want to do is protect it.

Only I can’t. That’s not fair. That’s not the way it goes. For you and for the other 20 kids who will walk into Mrs. Hoyle’s class in what quite literally will be the first day of the rest of your lives.

There’s a lot to do. A lot to know. And the sad truth is when you’re older you’re not going to remember much about your life before school started. There may be an image or two, a thought that might stick with you but beyond that it’ll be some sort of foggy blur.

So I’m going to tell you this now so we can look it up in 20 years and laugh about what a chicken your father was (and probably still is):

You are joy. You are everything that is good stuffed into 38 pounds of skin, bones and bliss.

I know that sounds like a lot to put on your tiny shoulders, but anyone who has spent more than five minutes around you knows it’s true. It’s the only way to explain a kid who turns to either one of his parents randomly and says “Mommy/Daddy, I really love you” and then goes back to whatever he’s doing without asking for something in return. The only way to explain a boy who still needs to touch his mother’s skin before bedtime, who shares his toys with his sister so willingly, who loves with a sincerity that I wondered could ever exist.

I see you and wonder how I could possibly be responsible for half of it. I’ve spent most of my life dealing with a voice in my head that makes me constantly examine my worth. If that same voice pops up in yours, I pray you have the strength (and the confidence) to ignore it the way I couldn’t.

The greatest days of your life lay ahead. It begins the second the bus doors open tomorrow and you let go of mommy’s hand and grab onto your lunchbox and pull out of sight.

Starting tomorrow, your journey really begins. You will learn how to write letters and read books with chapters in them. I predict you’ll become obsessed with math. You’ll sing songs and run races. You’ll make friends that will last a lifetime. You’ll have your heart broken by a girl (eventually). You’ll get sent to the principal’s office (at least once, or you’re doing it wrong). It will be the best time. And I can’t believe I get a front row seat.

In a month this will all seem routine. In a year it will be an afterthought. In five we’ll pull out pictures of your first-ever day of school and your mother and I will laugh about how scared we all were.

We promise to be brave tomorrow morning. We won’t cry until the bus is around the corner, until the little baby with the seemingly inflatable cheeks is on his way to take on the big, bad world. One that will be a little better because you’re in it.

Thank you for the last five years Goobs. They have been the best of my life, no matter how complicated I tried to make it at times. You have taught me how to be a man, a gift I’ll never be able to repay. I’ll try to remind myself (and you) that you’re still our little boy. I’ll make sure to remind you that no matter what adventures await, your mother, sister and I will be there.

We just don’t get to hog you anymore.

May it never go out.